‘Glass Onion’ Costume Designer Reveals the Clues in the Clothes

Glass Onion: A Knives Out Mystery finally hits Netflix this week. The long-awaited sequel follows detective Benoit Blanc (Daniel Craig) as he peels back the layers of his latest unsolved murder mystery, this time on a private island in Greece.

And while Glass Onion may have a new cast—among them Edward Norton, Leslie Odom Jr. and Dave Bautista— along with a new location, it is again written and directed by Rian Johnson and features costume design by the brilliant Jenny Eagan. In an interview with Men’s Health, Eagan shares her behind-the-scenes sartorial secrets. Which piece will replace Chris Evans’ infamous cable knit sweater? What was the inspiration behind Benoit’s stripes and silk scarves? How did they land on Dave Bautista’s speedo, sarong, and Crocs signature look? What really goes into making costumes for the entire Glass Onion cast? And of course, are there clues in the costumes? 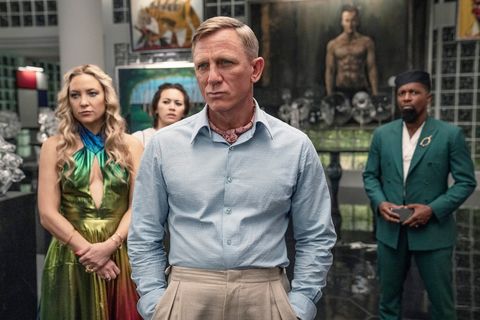 Men’s Health: Can you tell us more about the process for Glass Onion compared to its predecessor, Knives Out? Aside from Daniel Craig, it’s a new cast and a new location. What was that like for you as a costume designer?

Jenny Egan: I think it might have been more pressure had it been the same family or the same cast. It’s that much more exciting to understand, Where is this world that Rian has built? Literally and figuratively. Greece was exciting but preparing for…

‹ How to Shop Smartly for Fashion in Paris › The real fashion queen? What Kate can learn from Camilla